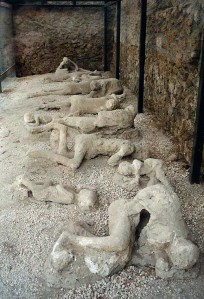 ON THE walkway that leads to the entrance to its current traveling exhibit, “One Day in Pompeii,” the Franklin Institute has proudly erected banners commemorating similar blockbuster shows of recent years. This afternoon, as I waited for the doors to open to the Pompeii exhibit, I spied flags for Body Worlds, King Tut, Star Wars, and other prior attractions. I was reminded of my long-ago days as a science writer, when we ran stories questioning whether such show business sullies a museum’s mission or serves as a hold-your-nose necessity in order to bring paying customers through the turnstiles so that the study and celebration of actual science can continue.

I’m sympathetic to both sides, but in this case, the Institute has whiffed.

Pompeii was literally buried into oblivion in the year 79 A.D., when the eruption of Mount Vesuvius blasted the city with incomprehensible levels and amounts of heat, lava, and toxic gases. The catastrophe killed tens of thousands of people and dumped up to 20 feet of ash on the area, obscuring it for centuries. Without exposure to light or air, Pompeii’s remains were remarkably well preserved and proved to be an archaeological and anthropological treasure when they were discovered. The money shot was the plaster casts that were made of the dead, many of whom perished and were covered up with such suddenness that they were frozen in chillingly lifelike poses.

“One Day in Pompeii” purports to “offer an insider’s glimpse into the daily life — and tragic end — of this Ancient Roman city.” What it delivers is much more of the former than the latter.

The artifacts on display — sculptures, paintings, artifacts, and such — do give you a sense of what the people of Pompeii saw and used, what their houses looked like, and so on. But that’s nothing you couldn’t get from a middle-school history class or a low-level art museum. When it comes to what you really want to learn about — the destruction of an entire thriving city — you don’t get much. There are a handful of the plaster casts noted earlier, and a brief, CGI-drenched video about how the eruption and subsequent calamity may — may — have looked, and that’s about it. As a cultural examination, it is mildly interesting; as an historical exploration of a unique and supremely tragic event, it is underwhelming.

That said, the exhibit did at least one thing it was supposed to do: We signed up for a family membership, so we’ll be back to visit Sir Isaac’s Loft, the Fels Planetarium, the Sports Challenge, and all the rest of what makes the Franklin Institute the nifty place that it is. With luck, the next traveling exhibit will have more heart to it than the giant model ticker that remains a touchstone of the entire institution. | DL

Photo taken by Lancevortex. Garden of the Fugitives, Pompeii. 30 Jan, 2000.

One thought on “A Volcanic Exhibit Arrives Not With a Bang, But a Whimper”